Artifical reef has generated millions for the Cornish economy

Original article from The Cornish Guardian 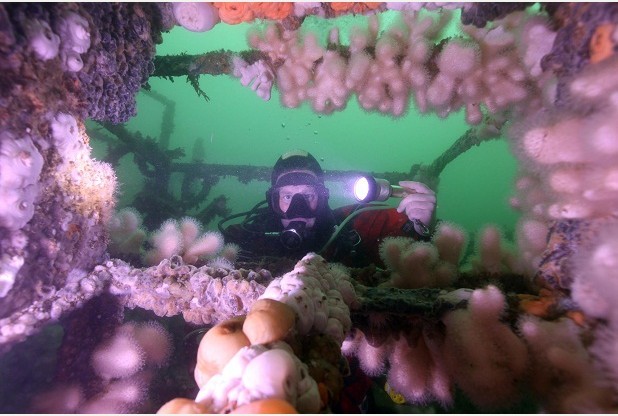 A Navy Frigate sunk off the Cornish coast to create Europe’s first artificial diving reef has generated tens of millions of pounds for the local economy.

HMS Scylla, an ex-Royal Navy Leander Class frigate, was sent to the bottom of Whitsand Bay on March 27, 2004, in spectacular fashion – watched by thousands of spectators.

Since then, the wreck has enjoyed lasting success with thousands of dive trips generating an estimated £60 million over the last decade.

Dr David Gibson, managing director of Plymouth’s National Marine Aquarium, which led the project, said: “It has created a completely new environment for the flora and fauna of Whitsand Bay.

“It is home to a community of animals and, from what I am told by divers, is providing a safe haven for tens of thousands of fish.

“From an economic perspective it has been a big success with an estimate 5,000-10,000 dives a year. That has had a significant economic impact on tourism including dive shops and boat operators.”

HMS Scylla, a former Royal Navy ship, marked the end of an era when it was the last warship to be built in Devonport in 1968. It saw plenty of active service during the Cold War, surviving a couple of collisions, including one with the Torpoint Ferry.

But she was decommissioned in 1993 and left to rot in a Portsmouth dockyard, until the plan was hatched to turn her into an artificial reef.

Thanks to funding from the South West Regional Development Agency, she was bought from the Ministry of Defence for £200,000 by Plymouth’s National Marine Aquarium.

The purchase heralded a six-month operation to turn her from seaworthy vessel to undersea wildlife kingdom with experts making sure diving hazards, such as wires, were removed and confined spaces either blocked up or enlarged.

Once the work was complete, the vessel was towed out to sea and packed with explosives.

The surfaces of the reef were covered very quickly with marine plants and encrusting animals.

After one year, around 50 species had been identified on or around Scylla.

There were a number of ‘waves’ of colonisation – in autumn 2004 there was a large settlement of Queen Scallops. This was quickly followed by a ‘plague’ of starfish that consumed all the scallops then died out themselves.

The colonisation has stabilised since 2006 with a community that now looks very similar to the James Eagan Layne nearby.

Colonies of Pink Sea Fans Eunicella verricosa are beginning to establish in various locations around the reef.

Although the project was designed to provide an injection to the tourism economy, it is also being used as an education facility. Surveys show a wealth of marine life have taken an interest in the sunken vessel. Among those spotted were sea slugs, anemones, John Dory, scallops, ballan wrasse, squid, cod, cuttlefish, triggerfish and conger eels.