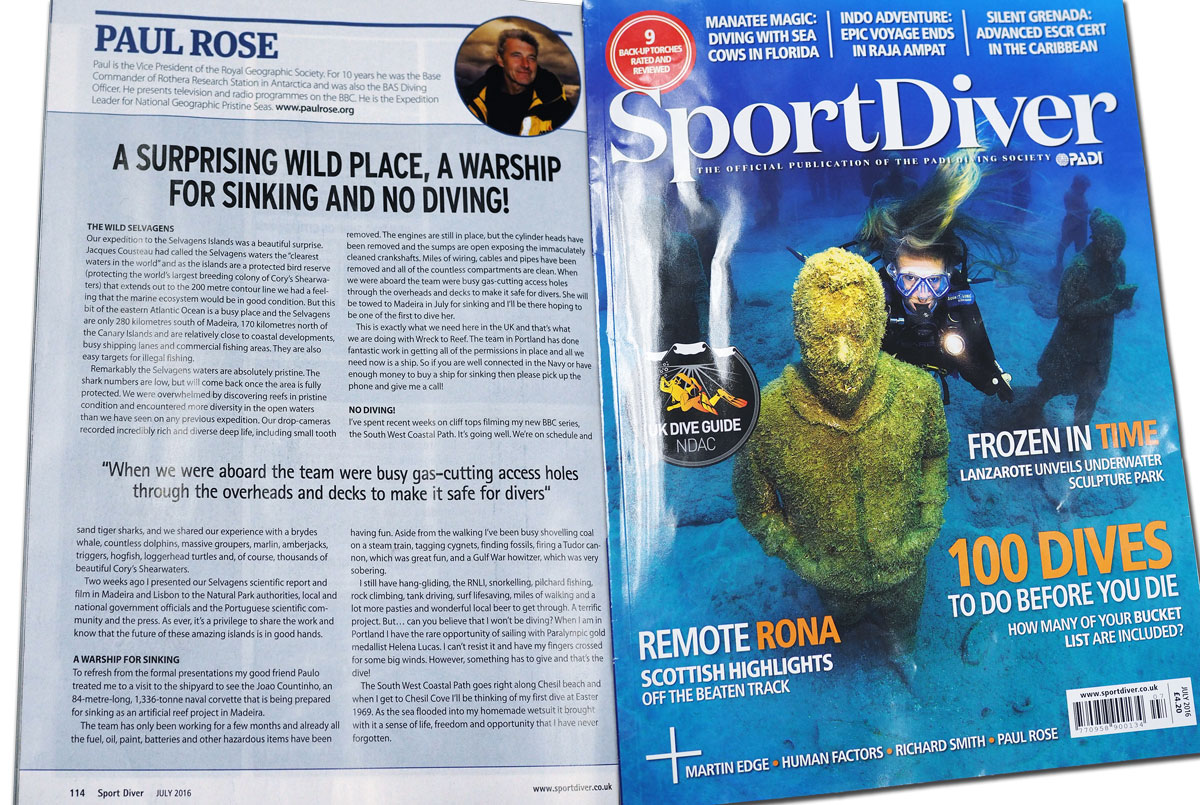 Our fantastic Ambassador Paul Rose visited a Naval Corvette being prepared for sinking as an artificial Reef in Madeira recently. When he came back he wrote this article for Sport Diver Magazine that talks about our project:

A SURPRISING WILD PLACE, A WARSHIP FOR SINKING AND NO DIVING!

Our expedition to the Selvagens Islands was a beautiful surprise. Jacques Cousteau had called the Selvagens waters the “clearest Waters in the world” and as the islands are a protected bird reserve (protecting the world’s largest breeding colony of Cory’s Shearwaters) that extends out to the 200 metre contour line we had a feeling that the marine ecosystem would be in good condition. But this bit of the eastern Atlantic Ocean is a busy place and the Selvagens are only 280 kilometres south of Madeira, 170 kilometres north, of the Canary Islands and are relatively close to coastal developments, busy shipping lanes and commercial fishing areas. They are also easy targets for illegal fishing,

Remarkably the Selvagens waters are absolutely pristine shark numbers are low, but will come back once the area is fully protected. We were overwhelmed by discovering reefs in pristine condition and encountered more diversity in the open waters than we have seen on any previous expedition.

Two weeks ago I presented our Selvagens scientific report and film in Madeira and Lisbon to the Natural Park authorities, local and national government officials and the Portuguese scientific Community and the press. As ever, it’s a privilege to share the work and know that the future of these amazing islands is in good hands.

A WARSHIP FOR SINKING

To refresh from the formal presentations my good friend Paulo treated me to a visit to the shipyard to see the Joao Countinho, an 84-metre-long, 1,336-tonne naval corvette that is being prepared for sinking as an artificial reef project in Madeira.

The team has only been working for a few months and already all the fuel, oil, paint, batteries and other hazardous items have been removed.

The engines are still in place, but the cylinder heads have been removed and the sumps are open exposing the immaculately cleaned crankshafts. Miles of wiring, cables and pipes have been removed and all of the countless compartments are clean. When we were aboard the team were busy gas-cutting access holes through the overheads and decks to make it safe for divers. She will be towed to Madeira in July for sinking and I’ll be there hoping to be one of the first to dive her.

This is exactly what we need here in the UK and that’s what We are doing with Wreck to Reef. The team in Portland has done fantastic work in getting all of the permissions in place and all we need now is a ship. So if you are well connected in the Navy or have enough money to buy a ship for sinking then please pickup the phone and give me a call!

I’ve spent recent weeks on clifftops filming my new BBC series, the South West Coastal Path. It’s going well. We’re on schedule and having fun. Aside from the walking I’ve been busy shovelling coal on a steam train, tagging cygnets, finding fossils, firing a Tudor Cannon, which was great fun, and a Gulf War howitzer, which was very Sobering.

I still have hang-gliding, the RNLI, Snorkelling, pilchard fishing, rock climbing, tank driving, surf lifesaving, miles of walking and a lot more pasties and wonderful local beer to get through,

But… can you believe that I won’t be diving? When I am in Portland I have the rare opportunity of Sailing with Paralympic gold medallist Helena Lucas. I can’t resist it and have my fingers crossed for some big winds. However, something has to give and that’s the dive!

The South West Coastal Path goes right along Chess beach and when I get to Chesil Cove I’ll be thinking of my first dive at Easter 1969. As the sea flooded into my homemade wetsuit it

brought with it a sense of life, freedom and opportunity that have never forgotten.