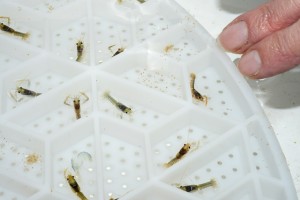 6am:
Collection of berried lobsters.

These adult female berried lobsters had been caught earlier in the week (outside of the six mile zone) and were being stored and looked after by our local Fish Whole Seller, S and W Ltd.  A big thank you to Richard Long for organising this.

These heavily pregnant ladies were well looked after and were to have a staring roll throughout the day.  They were photographed by several national and local newspapers.  It is hoped that these images would help explain to those of us who are less familiar with the world of lobsters, just what a precarious start to life they have and also to highlight what an incredible job the National Lobster Hatchery at Padstow does. 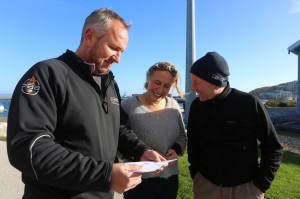 6:30am
With a colder and breezier Northerly wind than was forecast and the sun still yet to rise, Laurence Herdman from BBC Dorset cracked the ice off his satellite dish and carried out a live interview with Sean Webb, one of the founders of W2R down at the Dean and Reddyhoff Portland Marina.  As with all interviews, especially when they are live, you are at the mercy of the person with the microphone.  Laurence did us proud and allowed Sean the time to give the listeners a feel of what the day actually entailed. 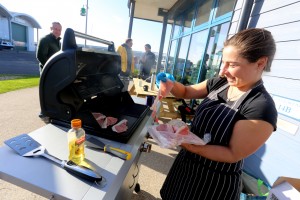 Smudge and Sarah of Scimitar Diving, despite having a course that day, opened up the doors of their shop and made everyone feel welcome.  They even fired up the BBQ and Oona Spencer did a great job feeding us all with bacon maps, while Daisy Darler kept the coffee and tea cups full.  Later in the day, Oona switched her culinary skills to that of boat crew and safety officer.  As Stewart Lambert said…, is there no end to this women’s talents.

Not sure if it was the smell of the bacon, or the fact that the warmth of the sun was beginning to tame the chill of the breeze, but it really had all the ingredients of becoming one of those days that we would all remember. 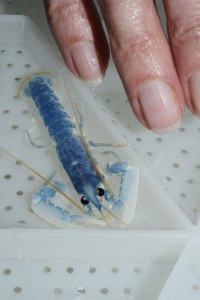 Baby Lobsters arrive…, all present and correct.  Smiles all round.  They were carefully loaded onto our dive boat for the day, Cutlass where under the guidance of Dominic, they were acclimatised to the local water temperature by  applying the deck wash until we were ready to leave. 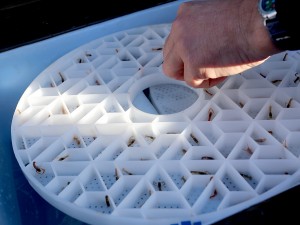 10am
Down on the Pontoons, the guys and girls from Southern IFCA had arrived in their new purpose built RIB.  It was Ian Carrier, the then Southern Seas Fisheries Officer, who suggested that we look into setting some of the Wreck to Reef site aside as a lobsters reef.  That advice was invaluable, as it led to European funding that has allowed us to get the project thus far.

With Kelsey Jane the Weymouth based boat, skippered by Bob Hope and his work in-progress apprentice, number one son, Bob Hope Jnr coming alongside, we knew it would not be long before everything was in place.

Kelsey Jane, kindly supplied free of charge, would be a safe and stable platform for the press.


11:30am
By this time, all but one of the ten volunteer divers had assembled their gear on Cutlass.
Mid-day
Stuart Lambert, from Surrey dive club Dive 360 smiled and bounced his way down the pontoon, making our dive team complete. 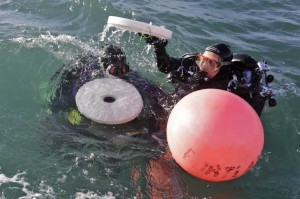 12:30 / 1:30pm
With briefings from Dominic on how best to release the lobsters from their temporary enclosures once we had delivered them to the artificial reef and Dave Sellars our skipper reminding us of safety and procedures whilst on board, we were ready for ropes off.  By 12:45 we were heading towards the Northern entrance of Portland Harbour and the Northerly breeze that appeared to be easing had increased in strength and felt colder again.  If it continued, an already difficult task would be made all the more testing for all concerned.

The Sea Police, Southern IFCA, shot ahead in their new purpose built RIB to make sure that the marks that were laid by Marcus Darler and Sean Webb (O’Three Ltd) two days before had not moved.  They radioed Dave, skipper of Cutlass, to say all was well.

As we approached the site, the protection of the Jurassic coast played its part in sheltering us from that cold Northerly breeze and the warmth of the sun was felt again.  Everything was coming together.

Local fisherman and Fisheries Liaison Officer Bob Summerhaize was also in position having steamed out from Weymouth Harbour earlier.  Bob has been instrumental in keeping the local fishing community accurately informed of the project’s progress, which has meant Wreck to Reef continues to have their full support.

The job of co-ordinating the four boats fell to Bob Hope on Kelsey Jane and thanks to his calm stewardship the press were able to get close enough to obtain the top side images they needed, whilst keeping divers Sarah Payne (Scimitar Diving) and Cathy Taylor (Skin Deeper, the Bunk House and daughter of dive boat pioneer and legend Andy Smith) were safe at all times.

Sarah and Cathy were thrilled to bits to be the first divers to release their lobsters and were accompanied and filmed by well-known and respected diving journalist and photographer Stuart Philpot.
Stuart has given his time and allowed Wreck to Reef to use his images for free.

At exactly 2pm (slack water), Dave was given the go ahead and manoeuvred Cutlass back into position where he was able to drop the remaining paired divers into the water.  It’s not easy jumping off the back of a boat in full diving kit, whilst trying to keep hold of several hundred lobsters with as little disturbance to them as possible.  Everyone did a great job without a single weight belt or fin being forgotten.

A line had been laid between two surface marker buoys and each pair of divers had been instructed to swim along this line until “their” mark came into sight.  Each mark was approximately 10 mtrs apart.
It was at these positions the lobsters were gently released from their honeycombed cages.  Dominic Boothroyde had asked us all to observe how the baby lobsters behaved when released.  He told us what should happen.  It was very reassuring that the vast majority instinctively headed for the nooks and crannies that the artificial reef had created.  Those babies that took a little more time to adjust were being protected by the sheer presence of the other divers in the water.  Everyone was very confident that we did not lose a single one to a hungry fish.

2:30
With only Sean Webb and Stuart Lambert left in the water, it was their job to wind in the marking line and remove the shots from the reef.  By 2:40 everyone was safely back on board Cutlass with a hot drink and heading for home.  No longer sheltered from the Jurassic cliffs overlooking Weymouth Bay the atmosphere, smiles and general banter kept us all warm on that short trip back into Portland.

In the grand scheme of things, a thousand baby lobsters released is a drop in the ocean.  However, if Wreck to Reef is successful in its next phase of negotiations, hundreds of thousands will be released onto this reef in the next four to six years.  Add to this the work that the National Lobster Hatchery is undertaking with other groups and we really will begin to see lobster numbers increase.

As Neville Copperthwaite so rightly said

this is practical conservation.  We are putting something back, which in time will redress the balance.

Topside Photography:
Penny Piddock – Thank you Penny…, you have done us proud over the years.
Daisy Darler – You were a great help all day Daisy.