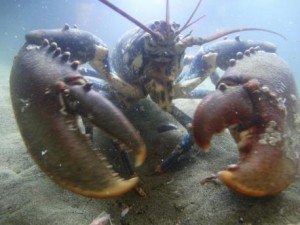 Lobster restocking is practical conservation; it redresses the balance.

In a ground breaking initiative to halt the decline in our seas, ordinary people have taken things into their own hands in order to do something about it!

A community group on the south coast of Dorset (Wreck to Reef) have not only built an artificial reef in the sea using 2,000 tonnes of local stone, one year later they are now about to restock the reef with 1,000 baby lobsters.

This has been made possible through an extra-ordinary amalgamation of fishermen, divers, scientists and the Sea Police, (Southern IFCA), and of course laymen, determined to show the world that through working together, anything is possible.

Right from the start we have refused to become ensnared in the polarised world of conservationists versus people that Weymouth and Portland make a living from the sea.

After all, we all want the same thing, clean productive and healthy seas. It is sometimes useful to point out that if the land was treated in the same way as the sea and we never replenished it with new seed, we would soon run out of crops. The sea is no different and yet nothing is ever put back into it; so why should we be surprised that stocks are declining? Lobster restocking is practical conservation; it redresses the balance.

The baby lobsters are being donated free of charge by the National Lobster Hatchery based at Padstow, Cornwall and they will be released onto the artificial reef in Weymouth Bay by divers on Wednesday the 6th November.

The Sea Police have also granted £17,000 for 1,000 baby lobsters to be released onto the artificial reef each year for a further three years.

These will be ‘tagged’ by scientists from the National Oceanographic Centre in Southampton prior to release, and local fishermen have volunteered to carry scanners on their boats to monitor the lobsters to assess survival rates.

The baby lobsters are only two centimetres long when placed on the artificial reef and they will take 5 to 6 years to reach maturity. The idea is not to catch those baby lobsters, but rather to encourage them to leave the specially designed reef once they have grown to adulthood and wander off into the wider environment to breed. In this way, the wild population of lobsters will be enhanced, enabling the fishing industry to continue and thrive into the future.

The existing artificial reef is designed for very small lobsters. Eventually they will ‘outgrow’ this reef and move out. In order to stop them wandering off across the surrounding seabed before they are old enough to fend for themselves, a larger reef is being built around the existing reef using larger stones.

These stones are specifically shaped to accommodate larger lobsters. In order to fund this reef, people can pay to have their loved one’s cremated ashes sealed in each individual stone by a granite plaque.

Think of them as underwater headstones. We call them Solace Stones. (See http://www.solacereef.co.uk/ ) This innovative ‘outer reef’ will in effect become a circular memorial reef, the first of its kind in the UK